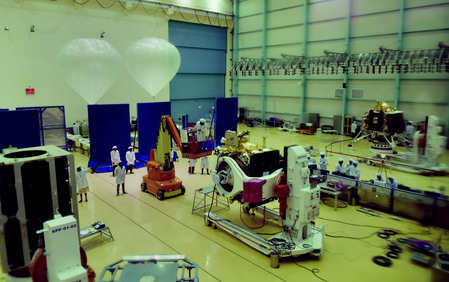 Chennai: Reducing the orbit of Chandrayaan-2 Orbiter to pick up any weak signals or to take a closer look the moon lander Vikram that had crash-landed on the lunar surface is a dangerous move, contend space scientists.

According to sources, the Indian Space Research Organisation (ISRO) is looking at reducing Chandrayaan-2 Orbiter’s orbit from 100 km to 50 km above the lunar surface.

“Reducing the orbit of the Orbiter is a dangerous idea,” a former space agency official, speaking on condition of anonymity, told IANS.

“What is ISRO going to gain by this move is not known. Even if the Orbiter is able to pick up weak signals, in all probability, it will not be able to revive Vikram.

“At or above 100 km altitude, the Orbiter is safe. But if it is brought down to 50 km, then it has to be maintained there which requires firing of the on-board engines. If that is not done, the Orbiter will slowly go down,” he added.

Firing of Orbiter’s on-board engines will expend fuel and thereby reducing its life, he said.

According to him, what is on hand is the precious Orbiter which should not be risked at this stage.

“The lander Vikram has gone. Period,” he added.

On September 8, the Indian Space Research Organisation (ISRO) said it has found Vikram on the lunar surface.

“The lander seems to have hit the lunar surface and is in an upturned position,” an official told IANS preferring anonymity.

After five earth-bound orbit raising activities, Chandrayaan-2 was inserted into the lunar orbit. On September 2, Vikram separated from the orbiter.
Early on September 7, Vikram, while on its descent to soft land on the moon’s south polar region, apparently lost control and crash-landed there, snapping the communication links.

Meanwhile, ISRO officials said that any update on Chandrayaan-2 mission, including the status of the moon lander Vikram that crash landed on the lunar surface on Saturday, will be announced on the organisation’s website.
http://www.gadgetsnow.com/tech-news/reducing-chandrayaan-2-orbiters-orbit-may-be-dangerous-say-space-scientists/articleshow/71051291.cms