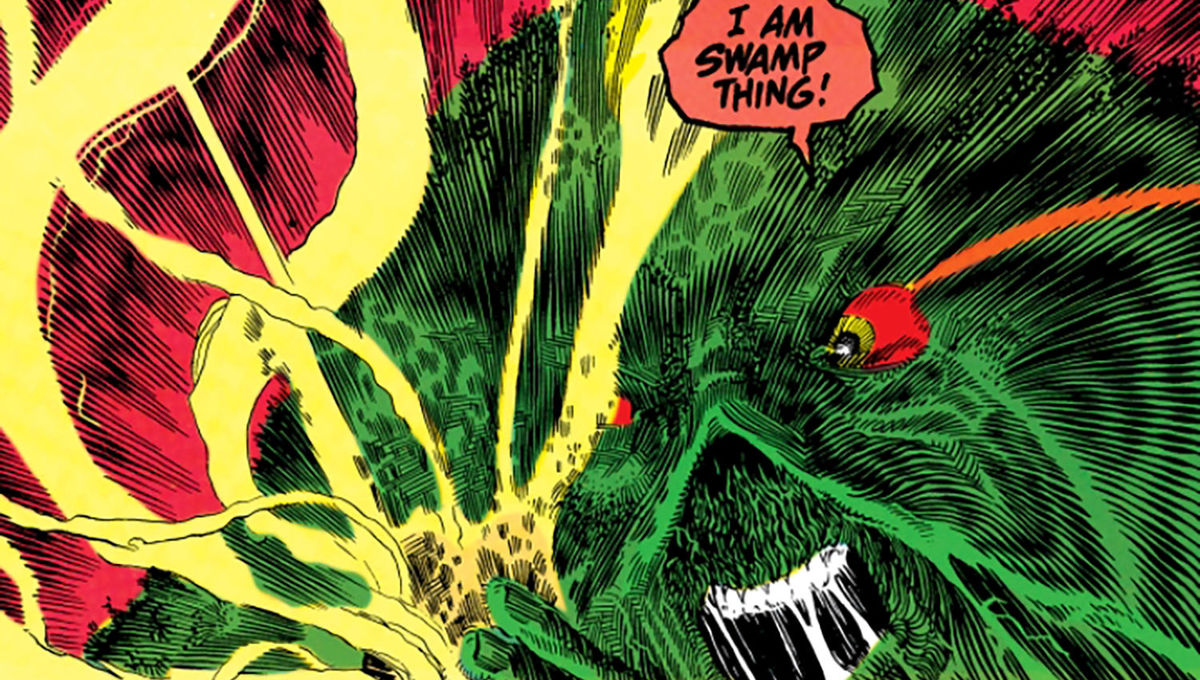 Swamp Thing might be best known from Alan Moore’s seminal run in the mid-’80s, and Nancy Collins might be recognized most widely as a novelist, but this is the story of where their paths crossed. Collins took over the series when its sales were in limbo, returning a moody horror vibe to a premise that had somewhat lost its way.

Collins’ run might not receive the fanfare of other Swamp Thing eras, but when it comes to breaking down the complicated and conflicting relationship between the memory of life as a man and Swamp Thing’s true calling as the God of the Swamp, her tenure on the series remains one of the most fascinating.

The Garden of Convoluted Origin Stories

The Swamp Thing series had started as an essentially standard DC horror comic of the ‘70s. Created by Len Wein and Bernie Wrightson, Swamp Thing started off as a man named Alec Holland who was apparently transformed into a green monster after a crew of corrupt businessmen (known collectively as the mysterious Sunderland Corporation) attempted to have him killed. After the original series ended, DC’s interest was reestablished due to the production of a Swamp Thing film directed by Wes Craven in 1982. Though it is indeed an early example of a comic book movie, it would now fit mostly in the realm of low-budget cult flicks. Still, the release of the film brought along with it a new interest in what had been a short-lived and mostly forgotten character. The Swamp Thing began anew under the title Saga of the Swamp Thing. This reboot continued the horror theme of the original series and attempted to introduce a new supporting cast for Alec.

This trajectory completely changed when the then-fledgling writer Alan Moore was given free rein over the book as it teetered once more on the brink of cancelation. Taking over with issue #20, Moore established most of what audiences would today consider essential to the character. The earlier incarnation of Swamp Thing had revolved around a man who had become a monster attempting to become human again. In the second issue of his run, Moore had the villainous Floronic Man dissect the Swamp Thing, only to discover that he was never a human being at all. In this new series, we learned that swamp vegetation had bonded with Alec’s fully deceased body and assimilated several of his characteristics, but that this creature was in no way the “real” Alec Holland. In fact, Alec was dead and had been from the beginning of the series, though it hadn’t been known to audiences or the Swamp Thing.

Today, Alan Moore’s run on Swamp Thing is considered required reading by many comic fans, and nearly all of the mythos of the character going forward would build off of the ideas from this volume. Without a human base to inhibit imagination, Swamp Thing discovered themselves to be a sort of swamp god, and their stories began to reflect that shift in consciousness. They eventually married Abby Arcane, the niece of the demonic archnemesis Anton Arcane. After Moore left the book, follow-up writer Rick Veitch went a little off the rails before quitting the book over creative issues. Doug Wheeler took the story in a different, more typical style that did not go over great, to say the least.

In an interview with Hasslein Books, Nancy Collins stated that she was one of many established horror authors that were asked to “audition” for taking over the series. Though not a fan of the more commercial aspects of the character (including the movie, its sequel, and the animated series that followed), Collins had begun reading the character in their original incarnation in the ‘70s. At the time of her first issue, she was the first female writer to have written the series, and to date, there have been no others.

More than any previous writer, Collins grounded the saga soundly within its environment of Houma, Louisiana, focusing on local Cajun culture, even spending an entire issue retelling embellished versions of regional folktales. Some characters were based on real people, and visual reference for the artists was gathered via firsthand visits to the area by the writer.  The villainous Ben Barron was directly based on real-life villain David Duke, who was then known for running for governor in Louisiana. Barron is put up against a satirical ad declaring the Swamp Thing as an opponent in the race to become governor.

Collins gave readers a glimpse of functional family life between Abby, Alec, and Tefe, though it was to be short-lived. In the beginning, there are many genuinely heartwarming scenes of them enjoying their time together, but, increasingly, demands on Alec as the Swamp Thing by the Parliament of Trees led him to make bad choices that endangered his family while working to heal the swamp.

Editorial gave the decree that Collins’ run would have to conclude with Swamp Thing isolated once more but gave her the option to kill off Abby and Tefe in order to achieve this conclusion. Hoping to spare two characters she had emotionally invested quite a bit into, Collins chose to have Abby leave Alec. In response to causing the breakup of one of DC’s most iconic couples, Collins would later observe, “Let’s be frank — no woman in her right mind would put up with the bullshit Abby Holland was subjected to on a regular basis. In fact, the first time I spoke to Alan Moore, he commended me on giving Abby the guts to walk out of an unworkable relationship.” Regardless of having chosen to spare Abby and Tefe rather than fridge them, she was to receive plenty of hate-mail for this decision.

Collins’ run on Swamp Thing merged a lot of disparate and strange elements of the serial in with her own political stance and a healthy amount of personal reflection. Abby came back to the forefront as she interacted but ultimately grew impatient with the chaotic world of the swamp god, especially when Swamp Thing created a duplicate of himself to stand in his place while he went and took care of swamp business,

Though Alec and Abby’s child, Tefe, had been introduced in an earlier run, much of the work of giving her a fleshed-out persona fell onto Collins. Rather than painting a portrait of an intrinsically evil child, Collins gave Tefe a number of believable traits that were neither good nor bad, then showed her doing seemingly benign things like creating life in the form of cartoonish, humanoid flowers that danced and held hands with each other. Only after several issues in the background do we see the horror of her creation as these creatures begin to murder each other and feast on rats.

Alec brings in another swamp spirit named Lady Jane to help with Tefe after the toddler graphically and brutally uses her power to kill a kitten that scratched her. Abby understandably had no interest in this arrangement, but Alec helps her to understand Jane’s intention by showing her Jane’s past life. The story of Jane takes us back to a woman living in poverty with no access to contraception who has many more children than she can care for and relies on a man she despises as well as working in a grueling job to provide for them. This woman’s children died in a fire, and knowing she couldn’t live without them, she rushed into the burning house to die with them. This is the catalyst through which she becomes a swamp spirit, much in the same way Alec Holland later does.

Breaking away mid-story to introduce a new female character via a tale demonstrating the need for safe and legal contraception is not exactly something we see a lot in comics today, let alone 30 odd years ago in mainstream comics. This story is almost bafflingly good, and it comes out of nowhere. Abby’s deeper understanding of Jane is established. Later, though, when Abby leaves Alec, Jane and Swamp Thing have a bizarre sexual relationship after he grows out his hair and more or less finds himself in the swamp god equivalent of a midlife crisis. Even Jane ultimately leaves him, and by the end of Collins’ run, Alec is indeed alone.

Collins’ run lasted from issues #110-138, during which time delivered excellent characterization for the existing cast, from Abby to Constantine. She grounded the series in local lore and geography, making Swamp Thing seem inherent to the culture and region it had ever claimed to be part of. She added diversity with queer, activist, and Black characters that had scarcely existed in much of the series’ history. She gave us what remains one of the most genuinely unsettling takes on Anton Arcane to this day. She revisited a number of old concepts through a different lens while bringing in interesting new female characters like Lady Jane and Connie Sunderland, though many of them were unfortunately mostly forgotten shortly after the end of her run.

Still, even discounting the directions the story went in, there are other historical reasons to remember Collins’ arc. IIn 1993, something like 10 years after the beginning of Alan Moore’s run on Swamp Thing, Vertigo Comics was launched. Though Swamp Thing is today considered a founding Vertigo title, the launch of Vertigo in fact coincided with Swamp Thing #129, making that the first issue to sport the logo on the cover, after years of inspiring several weirder, more macabre takes on the DC Universe from any number of creators. This occurred within Collins’ run, making her a year one Vertigo creator.

After Collins’ departure from the book with #138, or technically its follow-up, Swamp Thing Annual #7, Grant Morrison co-wrote a short stint with Mark Millar, who then took over the book. Though both writers went on to establish themselves as internationally famous comic writers, their work there does not generally rate among best-remembered Swamp Thing stories. This final derailing led to the series being canceled for a few years, and when it returned the tone had changed once more.

Looking back, Collins’ Swamp Thing stands on par with the other iconic creative runs on the character. The premise had been redefined several times to the point of becoming convoluted, but Collins brought the heady concepts of the story back down to earth while allowing them to loom over the arc until ultimately fully allowing them to consume the series once more. Tributing previous eras of the Swamp Thing but never seeming repetitive, Collins’ arc is an underrated must-read for Vertigo and Swamp Thing fans alike.

The views and opinions expressed in this article are the author’s, and do not necessarily reflect those of SYFY WIRE, SYFY, or NBC Universal.

Myst movie and TV series in the works