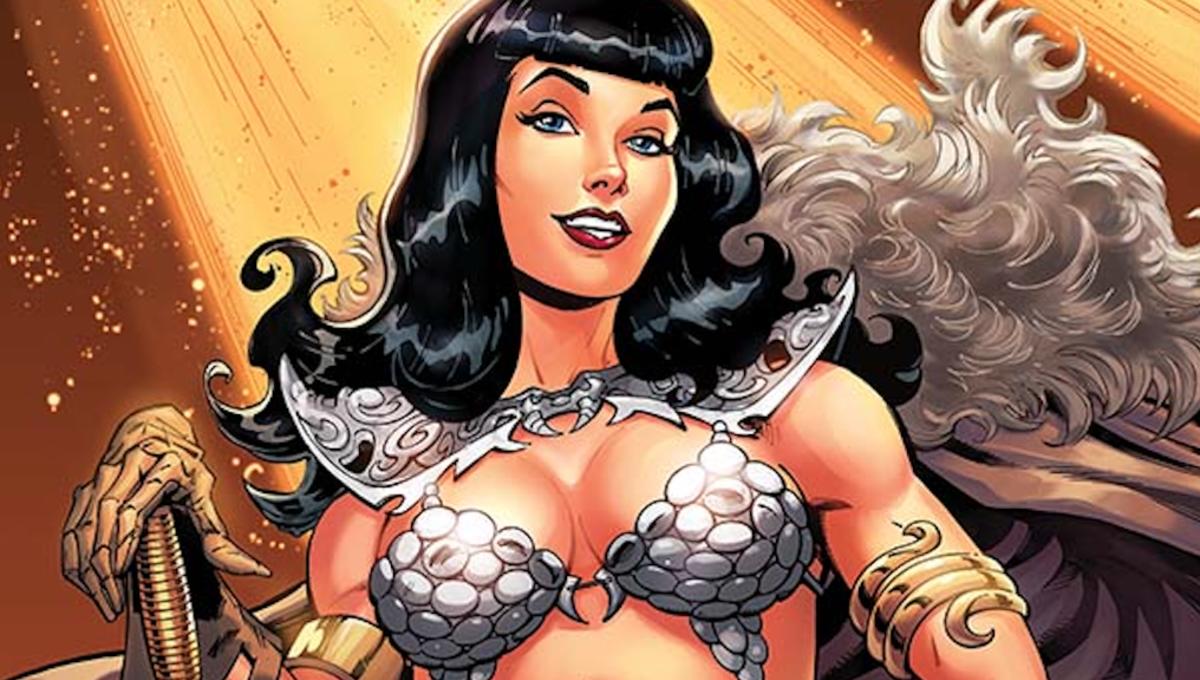 A rousing 4-issue summer miniseries from Dynamite Comics seeks to transform the effervescent icon into a Red Sonja-like warrior in Bettie Page: Unbound — and SYFY WIRE has an early look with comments from writer David Avallone.

Taking a cue from Robert E. Howard-like reavers such as Red Sonja and Conan the Barbarian, Bettie takes up the sword as she steps through an inter-dimensional gateway and finds herself clad in a bikini made of silver coins. With reality shattered, the dangerous portal is now wide open for a lethal invasion from the Lovecraftian Great Old Ones, and only the slinky model spy Bettie Page can save the planet.

Avallone explains that up until now, the Bettie Page comic has been an homage to all the pop fiction and culture of the early ’50s, with stories that reflect the time.

“But this new series is something bigger and crazier, and more based on the kind of epic comic book arcs I love: when I pitched it, my joke title was Crisis on Infinite Betties,” he tells SYFY WIRE. “This time, Bettie has to save the whole universe, and to do so she has to take on the personas of four archetypal heroes. Her next stop finds her embodying another popular Dynamite character, but you’ll have to read the comic to find out who.”

From the beginning, Avallone has loved writing Bettie as a character and did extensive research before he sat down to create, including listening to old interviews with her.

“Hearing Bettie’s actual voice, her strong personality comes though, and that woman — the one on those old tapes — was someone I wanted to write,” he adds. “Artist Julius Ohta is a dream collaborator: he has a true gift for likeness, a great sense of pace and drama, and lastly, he shares my obsession with period detail, costumes, props, settings, etc. Colorist Ellie Wright is relatively new, but I think her work on Bettie demonstrates world-class talent. Letterer Taylor Esposito is — to quote Warren Ellis recently — ‘one of the best letterers of his generation.’ And I couldn’t agree more.”

Enter the dimensional gateway to our exclusive six-page peek at Dynamite’s Bettie Page: Unbound #1 in the gallery below, then tell us if you think Bettie will make a fetching fearless warrior when the premiere issue arrives June 5.

Looking back on Carol Danvers' time as Binary

The Best (And Most Important) X-Men Comics Ever